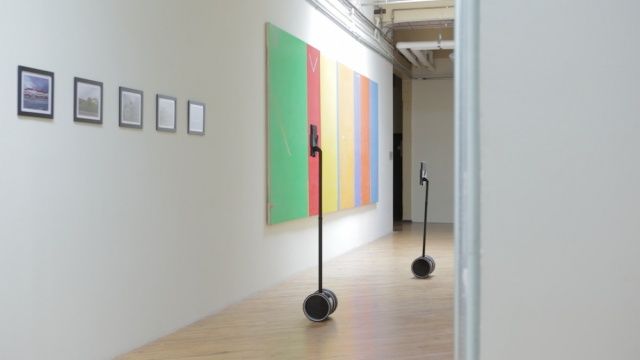 Ever wanted to be at two places at once? There is so much to see out in the world, but there are times when all you want to do is lay around on that comfy La-Z-Boy recliner. The solution could very well be the new Double Telepresence robot. For the price of $2400, plus two iPads, you can now accomplish being there without, ya know, being there.

Such a device has a lot of major implications, and beyond helping out my fellow couch potato brethren, this could be useful for people who are hospitalized or mobility impaired in some way, or simply for those that live thousands of miles away from someone but want to spend the day strolling and talking with them. Might seem odd to see someone talking to a robotic stand mounted with an iPad, but these are the times we live in, I suppose.

The Double Telepresence robot stand is self-balancing and holds one iPad which takes active video and allows you to speak to those around you. A second iPad acts as the controller, allowing you to control the segway robot. The two iPads and the robotic stand come together thanks to the magic of a special iPhone app, called “Double”. Once you have created your account and set everything up, your driver’s iPad will display all your Doubles on-screen, allowing you to easily grab them and go wherever you wish. That’s right, you can actually control several Doubles in different spots, all from one iPad.

While $2400 + 2 iPads might be a bit expensive, it’s much cheaper than many other telepresence systems in existence right now. It’s worth noting that you don’t actually need two iPads, really only one is absolutely required. Controlling the iPad/Double stand can be done through an iPhone, iPod Touch or desktop web browser as well.

Awesome idea, without a doubt. Practical and affordable? Maybe not yet, but Double is certainly a step in the right direction. Between virtual reality advancements and telepresence devices like this, there may someday come a time when no one hardly ever leaves there home. Is that a good or bad thing? Depends on who you ask.