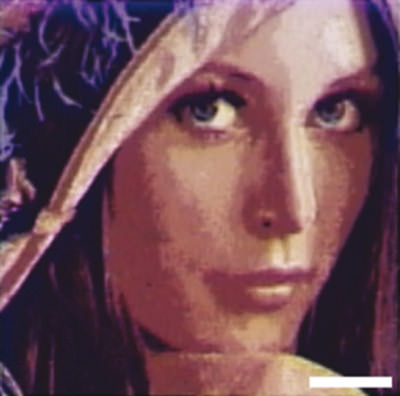 Digital photography has come a long way in the last decade. There was a time when film photography was considered superior in resolution and depth, but this time has clearly passed. While having a few thousand dots per inch on an image is considered a quality print for most of us, what about 100,000 dots per inch? This is exactly what Singapore’s government-related Agency for Science, Technology and Research has managed to accomplish.

Using a new technology that makes use of nanostructures and nanodiscs to create color, they were able to create an image of 100,000 DPI at an impressively small size of just 50×50 micrometers, though the image above has obviously been enlarged so we can see it. This basically means the image was squeezed into something that’s roughly the size of one pixel on many tablet and laptop displays today. I won’t pretend to fully understand how the technology behind it works, though the team of researchers behind the tech say their inspiration was stained glass This is the very first 100,000DPI image and is nothing sort of amazing. Using nanostructures to create the color also means that these photo prints are less likely to fade. The team behind the new technology has already applied for a patent covering its use. The inventors of this nanotech method hope to find commercial uses for it in the near future.

For more information about the new technology, and the science behind it, check out the detailed write-up at Phys.org.