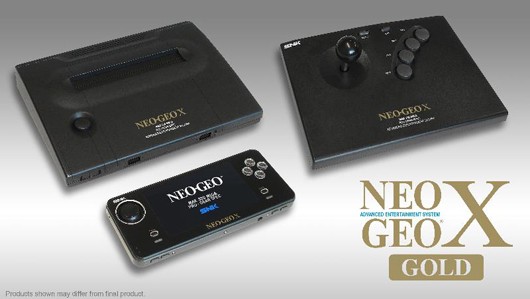 Arcade culture was booming in the 1990s and a big part of that had to do with the multi-game NEO GEO cabinets. Then, they decided to create a home version of the system, offering a nearly true arcade experience in console form. Unfortunately, the system cost about $650 and individual games were $200+. Compared to how much people were spending on the SNES and Genesis, the NEOGEO AES was just too expensive.

Yes, you can play select SNK and NEO GEO titles through the Wii’s Virtual Console or Xbox Live Arcade, but this is the real deal. Here is the NEOGEO X GOLD, a complete solution for both mobile and home-based gaming. Some people will say that this is “shockingly expensive at $200,” but you have to remember what you’re getting as part of this package. There is the NEOGEO X Handheld, which is almost like a squared off PSP with a 4.3-inch display, but you also get the NEOGEO X Station to connect to a TV via HDMI or A/V out, as well as the NEOGEO X Joystick.

If you consider that a quality arcade stick for the PS3 or Xbox 360 can easily run you $200 on its own, this is a pretty decent value. Of course, the joystick only works with the NEOGEO X, but the kicker is that it comes pre-installed with 20 classic NEOGEO titles. I’m particularly happy to see King of the Monsters and World Heroes Perfect, as well as Baseball Stars II, Fatal Fury, King of Fighters ’95, Magician Lord, and Samurai Shodown II, among others. This is my childhood! Aside from Street Fighter, I grew up playing as a Godzilla-like beast in King of Monsters and following the adventures of Terry Bogard and crew in the KoF series.

There’s no specific mention of what else could be coming down the pipeline, but they do say that there is an expandable game slot in there too. Hopefully a few more Metal Slugs make their way over. In any case, you can celebrate the 20th anniversary of the original NeoGeo by buying the NeoGeo X Gold starting on December 6 for $199.99. That sure beats spending $650 on the original AES and then thousands on the original titles, but that’s just for the collecting purists out there.