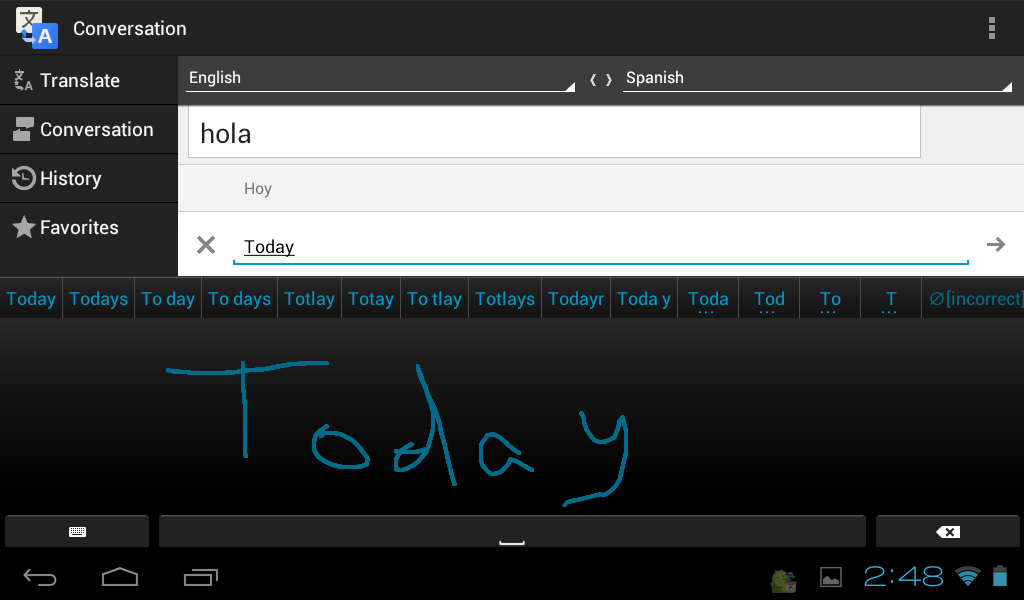 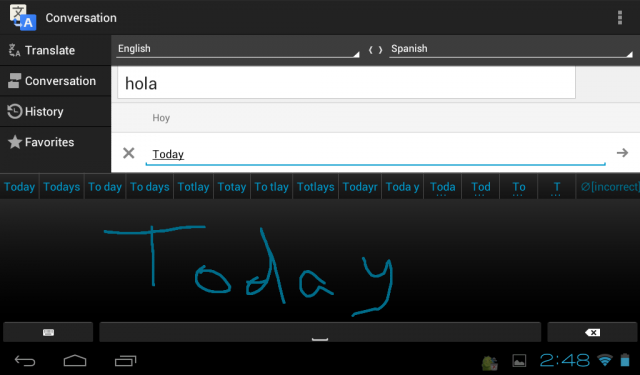 Google Translate might not be the most sophisticated or powerful translation app out there, but it has quite a few useful features, especially when you stop to consider that it is entirely free. Google recently updated the app to version 2.5, introducing several keys features that further improved an already impressive app. What is new in 2.5? The biggest changes include a new picture-to-text method that is useful for translating objects like signs. How does Google Translate 2.5 hold up, especially when compared to similar apps like Words Lens? Let’s take a deeper look and put Google’s language translator to the test.

Before we get started, it’s worth noting that the app is available for iOS and Android, though the specific version under review is the Android app.

Translating By Voice And Text 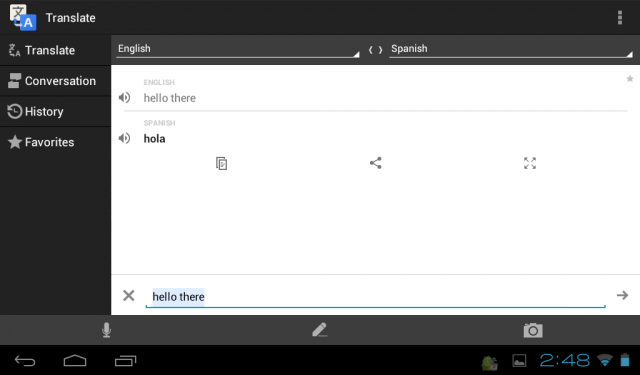 Google Translate has an extremely easy to use interface, which means popping it up and translating text quickly is a breeze. When inputting language, Google can “autodetect” or you can simply put in the exact language you are speaking or typing. As far as translating it to a different language, there are tons of options- this not only includes the usual suspects like Spanish, French, German and Chinese but a wide variety that extends to languages such as Afrikaans, Hindi and Bulgarian. In total, Google utilizes the ability to translate to and from over fifty languages.

Once you have your translation, you can either simply read it, or even have the app play it back to you in the translated language. Ultimately this makes Google Translate’s basic text and voice features ideal if you need a quick phrase to say to someone while traveling abroad, even if the translations are far from perfect.

With more common languages, Google does a terrific job creating understandable phrases that wouldn’t sound odd or out of place if you said it to someone of a different language or culture. At the same time, some of the less common languages are prone to minor misinterpretations during translation. As an example, the language Basque often confuses “get well” with “improve”. Either way, you should still be able to get the gist of what is being said in most cases.

The bottom line is that Google Translate has had a solid voice-to-text and text-to-speech service for a while now, and Google Translate 2.5 doesn’t change all the much in this aspect. The only significant change to this part of the service is that you can now type words like “hello” and instantly the tool will give you a translation on-the-fly, similar to searching a term through Google’s search engine works. 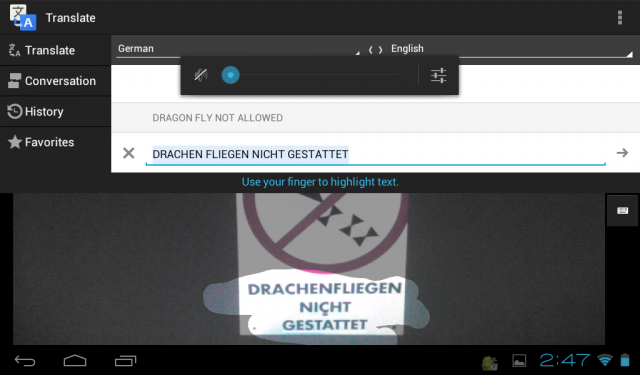 The most significant change in this update is the new picture translation feature. This feature allows you to take a photo of an object, like a sign, and get a translation. How well does it work? First off, you need to be careful how close you are to the words that you want to be detected in a picture. The angle of the picture matters too. I tested this out by browsing several websites for things like signs in foreign languages. Sometimes I had to take pictures a few times before Google would recognize that there were potentially words in the picture to translate.

Overall, it wasn’t hard to make this work, it just sometimes took two tries, though either way it only took a few seconds of my time. Once you take the picture, you simply rub the words you want translated and Google translates them. In contrast, Word Lens uses augmented reality to create an instant translation without any further interaction from the user. Google’s method works well enough, even if it isn’t as seamless as the Word Lens approach.

I noticed that the actual translations on basic and common signs sometimes turned out great, but other times were just a little off.  For example, a German sign read “Drachenfliegen nicht gestattet”, and showed a picture of a kite with a line through it. Logic dictates that it meant “No kites allowed”, or something like that. What was my translation? “Dragon Fly not allowed”. On the other hand, many other signs like “Stop” worked just fine. More than 75% of the pictures gave me logical text translations, but even when the signs weren’t quite right, they were still understandable.

There are some strong positives in Google Translate, but it does have its less-than-stellar aspects, too.

Let’s start with the downsides to the app:

Picture translation might not be perfect in Google Translate 2.5, but it’s totally free! It’s hard to complain when you get so many excellent features without any charge. In contrast, Word Lens has AR translations that might be (a little) quicker and more visually appealing, but the language packs cost $5 a piece, and there aren’t nearly as many language options provided for that platform.

As for the positive:

The bottom line is that Google Translate 2.5 is rather accurate, has an easy to use interface and is free with no adds. If you don’t want to use a premium app, and have basic translation needs, you can’t go wrong with Google Translate. You can snag the app for free by heading over to Google Play.