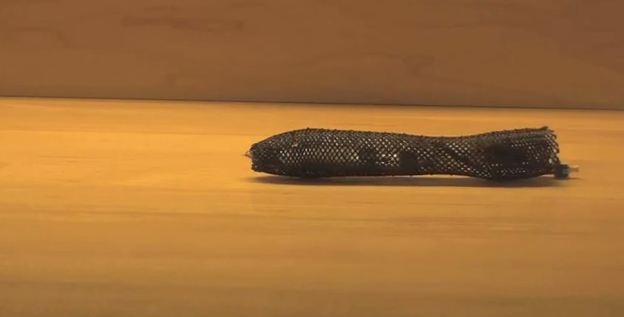 Science has always looked to nature for inspiration. We’ve already seen synthetic photosynthesis and humanoid robots that approximate the movement of people. For scientists at MIT, Harvard University and Seoul National University, they got their inspiration from the lowly earthworm when it came to their latest creation: the Meshworm robot.

The Meshworm robot is able to move along nearly any surface the same way that a worm does; it scrunches up its body, then it extends it. This crawling motion is referred to as peristalsis and while it may not be very fast, it does allow it to navigate through tough terrain where wheels or legs may not work.

There is a coil that wraps around the soft body and by sending an electric current through this coil, it squeezes the body and thus extends it. When this is released, sections of the body scrunch back up and through this repeated motion, the Meshworm silently moves along. What’s more, the body is made up primarily of soft materials, allowing the Meshworm to survive abuse by way of mallet and even getting stepped on. It’s an autonomous robot to boot.

It’s easy to consider what some of the military applications could be for the phallic-like robot, but the researchers have a broader vision. They’re considering next-generation endoscopes, for example, as well as for implants and prosthetics.