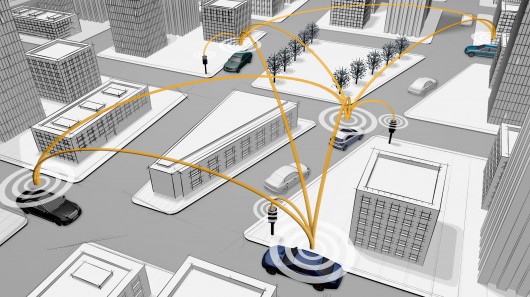 While there are certainly GPS systems out there that can give you some real time traffic information, the cars themselves aren’t really communicating with one another. Daimler has been working on a system called Car-to-X, or C2X for short, that effectively lets vehicles exchange information not only with eachother, but also with infrastructure like traffic lights.

Daimler’s been conducting field tests for the C2X system since at least 2006, but they’re about ot embark in the largest ever field trial in the Rhine-Main region of Germany. They’re outfitting at least 120 network-linked vehicles with the technology. With this system, the cars (and thus the drivers) can be alerted of upcoming traffic hazards way ahead of time, allowing them to divert their routes accordingly. Similarly, the system can find the best route to your destination based on real-time traffic data, as well as find the parking lot that appears to have the most available spots.

The communication works in the other direction too. With enough of these cars on the road, the traffic lights can adjust their patterns to improve overall traffic flow. If you have more cars heading in one direction than the other, perhaps they should get more green lights and for longer durations. Of course, it wouldn’t be fair for these specific 120 cars to control traffic patterns, but it does show what could happen if something like this becomes a standard feature.

In fact, the C2X trial is part of the larger Safe Intelligent Mobility – Test Field Germany (simTD) research project. Daimler is a part of it, along with other German automakers, automotive suppliers, communication firms, research institutions and public sector. This most recent trial puts C2X into the real world and out of the safe confines of a closed course. If all goes well, we may soon have more and more cars as part of this automotive “social network.” Of course, we’ll all have to get over our Big Brother concerns first.