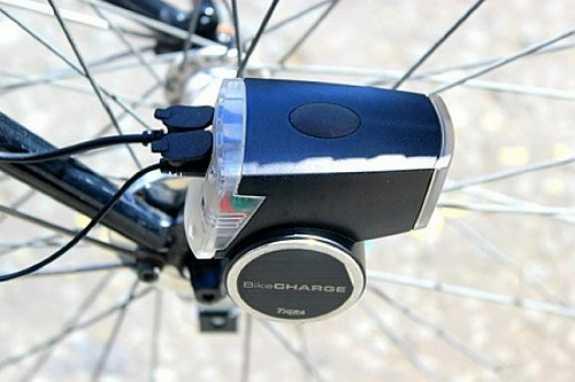 You’ve likely been to one of those science exhibits where they have a stationary bicycle attached to a lightbulb. You pedal faster and the light bulb gets brighter. That’s all well and good, but what about when you actually want to go somewhere with your bike and you want to do more than power a lightbulb?

The BikeCharge Dynamo is such a wonderfully simple yet remarkably useful device. It taps into your cycling energy and converts it into USB output power for your gadgets. The DC generator can be mounted on just about any bike and with the universal USB output, it can also charge the majority of smartphone brands. You could presumably use it to charge your iPod or your GPS device too.

But how much power is it really generating? According to the developers, you get 3W 5.0V DC output, which will let you fully charge a typical smartphone in about two to three hours. Even if you’re only cycling to the grocery store or taking a ride through the park, you may as well make the most of your expended energy, right? Thankfully, the BikeCharge Dynamo is also weatherproof and is 20% lighter than similar systems. There’s also a quick release clutch if you want to get rid of that extra resistance when you don’t need charging, as well as a built-in 1W LED light.

You can pick up the BikeCharge Dynamo for $99.99, and the installation is a simple DIY affair.