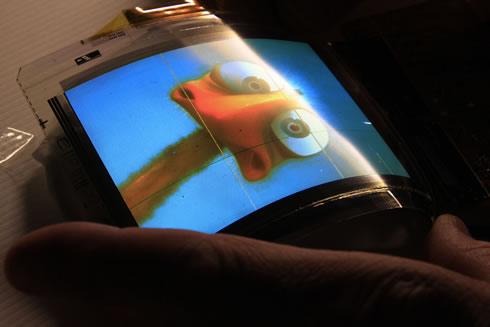 In light of the recent news regarding a flexible battery, it’s not surprising that rumors are popping up again about an upcoming flexible display coming its way to the smartphone world. What is a little unexpected though is that these rumors claim that the upcoming Galaxy Note 2, which is expected to be shown off on August 29th, might have such a display, a flexible super AMOLED.

Keep in mind that this doesn’t mean that the rumors suggest the Galaxy Note 2 will be a flexible smartphone. So why make the screen flexible if the plastic and battery in the Note 2 wouldn’t flex? From what we are hearing, such a design would allow it to contort enough to free up space for extra components like a larger battery, it would also make the displays a little more durable as well. More than likely though, this will be a semi-flexible display, able to bend and turn a little but not with the great twisting, bending and folding expectations that we eventually have for such display types.

Is it possible? Sure, it is, but even if a flexible display does ship with the Note 2, it really won’t be a noticeable component. I’d wager that we are still years away from truly flexible, bendable phones, though I could be proven wrong in time. What do you think about this rumor? Possible or unlikely?