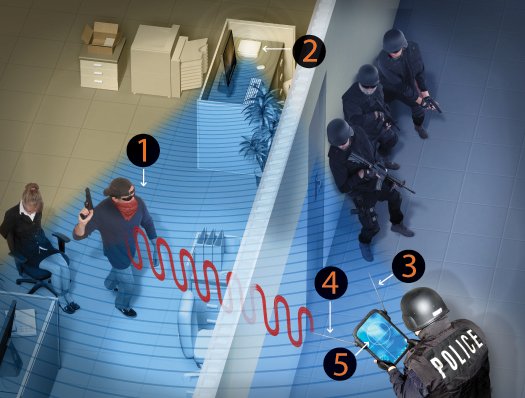 It’s not quite as advanced as Superman’s X-ray vision, but this newest innovation from the world of science is particularly noteworthy, because it makes use of pre-existing Wi-Fi networks. The new detector was created by Karl Woodbridge and Kevin Chetty of University College London and it taps into the Wi-Fi signal that is emitting from a regular old wireless router.

Have a look at the image above and follow along. You have a group of police officers who need to go and rescue a hostage, but they can’t see past that wall. The moving object (1) is the bad guy and because he’s moving, he’s creating a Doppler effect with the Wi-Fi signal coming from the office router (2). Remember that the radio waves compress if an object moves toward the source of the Wi-Fi signal and they “expand” if an object moves away from the source of the signal. This is fundamentally the same way that radar works, except they’re tapping into the existing wireless network.

The detecting device has two antennas. The first (3) is used to establish a baseline radio signal inside of the room beyond the wall. The second (4) is used to detect the “shifted” signal that results from the Doppler effect of the moving object. This changes the frequency of the radio wave and by comparing the signals from the two antennas, the device is able to calculate the bad guy’s location (5) within a few feet. It can even figure out speed and direction.

This is still very much in the early stages of development, but the UK Ministry of Defence is funding more research in the area that could one day have devices that can scan buildings during urban warfare, getting so precise that they can “pick up on the subtle motions the ribcage makes during breathing, which would allow the radar to detect people who are standing or sitting still.”