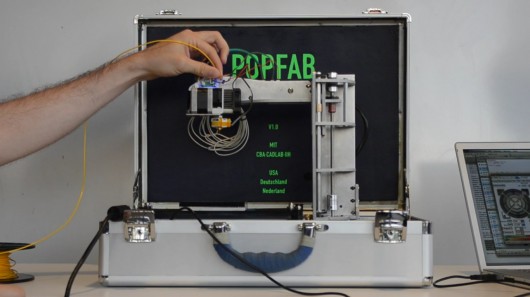 The era of 3D printing has firmly launched, but there are still some setbacks to using 3D printer technology, namely they aren’t exactly portable. While most 3D printers must be disassembled in order to be moved, two MIT students have come up with a new solution that fits easily in a small suitcase, the PopFab. Ilan Moyer and Nadya Peek developed the PopFab as a machine that could do all 3D editing while folding out from a metal briefcase easily and relatively quickly. Once folded out you simply need to attach the printing head to the fold-out arm, put in printing material and connect a computer to send the design.

The video below is one of what is proposed to be several ‘episodes’ that show off what the PopFab is capable of doing using different heads and attachments. Theoretically the PopFab could be used as a portable solution for vinyl cutting, drawing, milling, object creation and much more. The creators have even tested its traveling abilities by carrying it on aboard flights within the US, Saudi Arabia and Germany. The PopFab is a very interesting device at this stage and could have tons of potential. 3D printing itself has tons of uses, but adding the element of portability takes these uses even further.