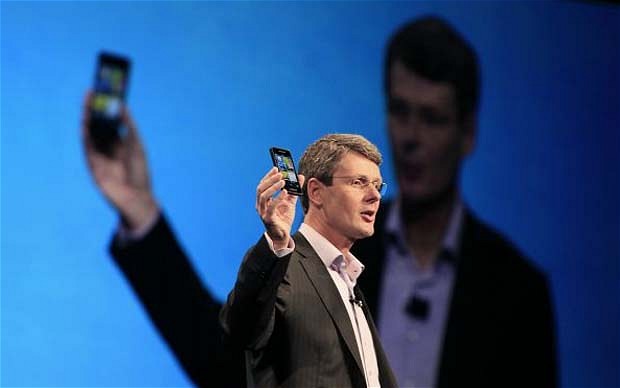 Can you imagine if ten years from now Apple fell down the ladder and was knocking on death’s door, so to speak? In a desperate move, would Apple give in and consider a licensing agreement, allowing former rivals like Samsung and Sony to produce iOS devices? Sounds crazy and unlikely, huh? That’s the situation RIM is now starting to find itself in, or so it seems. The days of Blackberry ruling the smartphone universe are over and the company has continually seen itself fall, once trading shares over $140 and now down to just $7.25.

In an exclusive interview with the Telegraph, RIM’s CEO, Thorsten Heins, confesses that the company doesn’t have the the ability to compete with larger manufacturers that crank out handsets and most look at ways to get more budget smartphones out into the market. One of the ways they are now considering doing this is through the licensing of BB10. Heins talks about how the company could build a reference system and then possibly have others build hardware around it. Whether or not these devices would be labeled as Blackberry, the CEO isn’t so sure of. At the moment they are merely looking into the possibility and haven’t firmly reached out or considered specific partners.

Ironically, Thorsten Heins talks about the possibility of reaching more consumers through a licensing deal and yet still manages to deny that the company is in deep trouble. Heins instead suggests that their current difficulties are due to a switch in operating systems that only should occur every ten years. While I agree that Blackberry OS7 is indeed part of the problem, switching from Windows Mobile 6.x to Windows Phone 7 didn’t cause this dramatic of a fall-down for Microsoft, perhaps because they were never on top in the mobile OS world in the first place? Either way, Heins stands behind the idea that people will be nothing short of impressed by what the BB10 OS is capable of.

The biggest feature of BB10 is its abilities to perform what Heins refers to as “true multi-tasking”, which allows it to control entertainment and gaming systems, car navigation and more- all at once. Can BB10 and a possible licensing agreement with OEMs turn it all around for Blackberry? It’s hard to say at this point, though (in public at least) RIM’s CEO seems awfully sure that everything will work out in the long haul. What do you think?