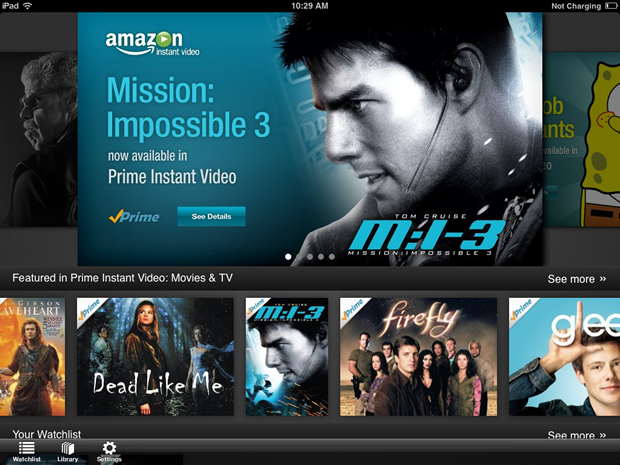 If you are currently subscribed to Amazon Prime but happen to have an iPad instead of a Kindle Fire, you’ll be happy to know that an Amazon Instant Video app has now hit the iPad. Similar to the desktop and Kindle Fire version, the app allows free watching of videos as long as you are already a member of the paid Amazon Prime service and gives you access to over 120,000 videos from the Instant Video library, though only about 18,000 of them are totally free with a Prime subscription. So what else is there to do besides watch videos? Like iTunes, the Amazon service also has a TV Pass option that will automatically download episodes to the iPad the day after they air. What’s cool about the Amazon service though is that if you start watching a video on one device you can pick it up on another supported device exactly where you left off, this includes the Kindle Fire, PS3, PC, Mac and special TVs and Blu-Ray players.

Now for the bad news about the new iOS app, the iPad might have Amazon Instant Video, but the iPhone, Apple TV and iPod Touch are sadly being left out in the dark. I suppose having iPad access is better than nothing though.