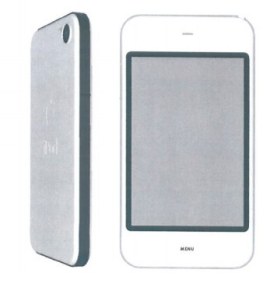 Recently Samsung received some pretty big criticisms and condemnations for its handling of email-related evidence, has seen its product bans grow beyond just Germany had have had their global legal battles with Apple continue to head further southwards. If you follow all the news regarding the alleged suites that Samsung copied Apple iPhone and iPad designs it becomes clear that Samsung has had some wins and some losses in this ongoing war, but recently Apple has certainly become a victor more often than not.

Samsung’s secret weapon in turning the tide of this war has been information and evidence that strongly suggests Apple itself somewhat copied or was directly inspired by Sony-style designs. Samsung hoped to use this information to discredit Apple’s own claims, but it turns out that this weapon was a total dud. Apple has now released an early iPhone concept design for what was known as “Purple”, though ironically the design itself was actually white in color. Purple dates back to 2005, while the Nishibori design from Sony that Apple supposedly copied actually was developed in March of 2006. With this new evidence it becomes clear that the Sony-Style models were more of a side project and the actual iPhone as we know it evolved from this concept design instead.

In light of the “Purple”, Samsung will no longer be allowed to show evidence in the trail regarding any Sony-inspired designs for iPhone, which is a major blow towards Samsung’s entire defense case. The war continues to heat up, but Apple is clearly looking like the victor in this war after all.