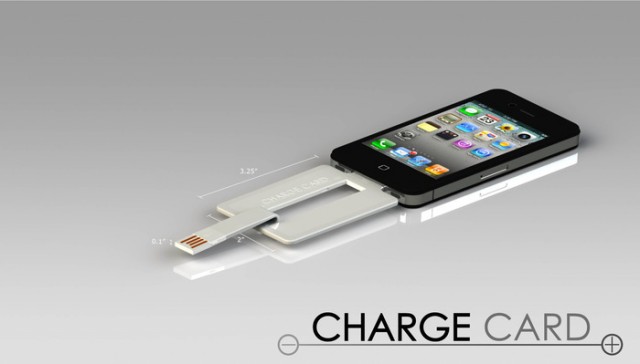 “Keys, phone, wallet: these are the only three things you have to remember.” That’s exactly the same mentality I have about leaving the house and I make sure I always have those three things. But what about keeping that phone charged? Carrying around a bulky AC adapter or USB cable just won’t do and that’s why Noah Dentzel, Adam Miller and Brian Hahn came up with the ChargeCard.

The idea is actually really simple and straightforward. It’s a credit card-sized device that can effectively work as a USB charge and sync cable for the iPhone. The USB connector simply flips out on a flexible arm and then the other end of the ChargeCard goes into the dock connector your iPhone. They only have the Apple-friendly model at the moment, but they say that they’re working on a microUSB version too. And then they’ll need one for the smaller dock connector on the upcoming iPhone 5, if rumors are to be believed.

The ChargeCard is slim enough to fit into your wallet, along with your driver’s license and credit cards, so you’ll never leave home without it. With 27 days to go in the Kickstarter campaign, they’ve already more than doubled their original funding goal of $50,000. Pledge $20 or more to secure a ChargeCard in the color of your choice.