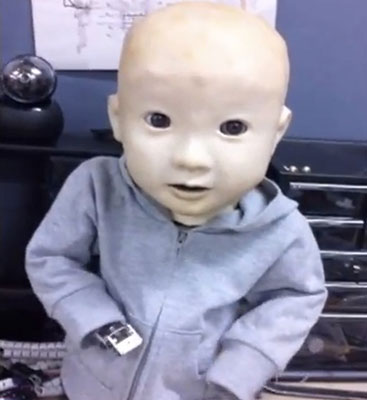 Conspiracy theorists are already preparing for the impending Robot Apocalypse and, let’s face it, Baby Affetto doesn’t do anything to ease any tension or worry that some of us have about our robot-filled future. If anything could make us more comfortable with the idea of androids and robots running a muck it would be a cute little baby robot, right? The problem is that Affeto is the exact opposite of quite and is more easily described as creepy or even outright terrifying.

In the video the baby is often without skin (which incidentally makes my own skin crawl a bit) and even when he gets his face back, he is still a very odd looking robot with no legs and a face that truly looks like it was pulled right out of some random horror film.

While Afetto might not be the cutest robot around, it’s still honestly pretty cool. The robot features 20 pneumatic actuators that allows it to move its body freely, including his arms, neck and even spine. The age of fully-functioning androids that don’t need any direct command or direction is still a ways off, but continued evolution in robotics makes it clear that the age of android-like robots is just around the corner. Whether that is a good thing or something that induces you with fear, that’s up to debate depending on who you ask.