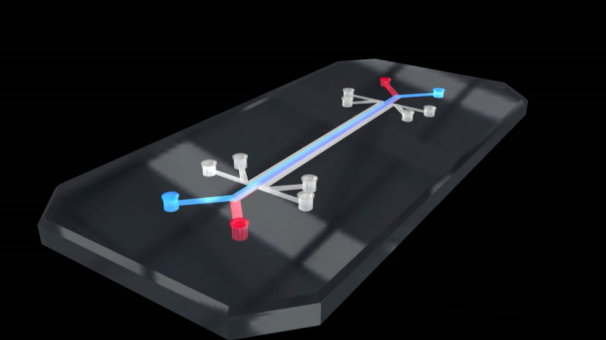 Imagine a world free of animal testing, where instead researchers could use organ-on-a-chip technology for testing new drugs and medicines. The Wyss Institute for Biologically Inspired Engineering at Havard is taking the existing concepts of organ-on-chip technology and going way beyond, linking up to ten of these systems together in a way that would simulate an entire human body.

These special chips are made using a silicon polymer with microfluidic channels that are etched into them and are then filled with human cells and pumps that actually make the cells provide movements similar to actual organs.

One example of this technology in action is a lung-on-a-chip which has an air sac, a separating membrane, a layer of lung cells and a blood channel that contains red blood cells. From there the chip can be connected to a vacuum pump that can cause the lung-on-a-chip to contract and expand like a real set of lungs. No matter what organ they are replicating, its clear that this technology has major implications that could help create more effective ways to test drugs without worrying about directly testing on humans or animals. The Wyss Institute has even entered a $37 million agreement with DARPA to create a system that uses 10 organ-chips in total to create a human-on-a-chip system that mimics many important functions such as the heart, bone marrow and the kidneys.