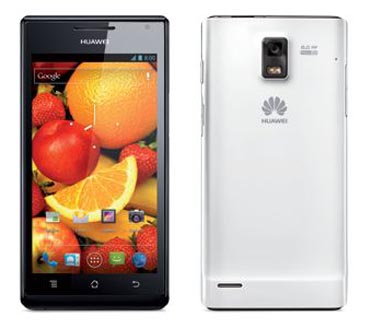 Huawei may not be quite the same kind of household name as Samsung or Motorola, but the Chinese company has quietly been increasingly its market share by approaching more affordable alternatives to its competitors. The latest Huawei smartphone to land on our Canadian shores is the Huawei Ascend P1, an Android 4.0 device available now through Wind Mobile.

Spec for the spec, the Ascend P1 looks like it can hold its own against most higher-end Android smartphones. There’s a 4.3-inch Super AMOLED display, a 1.5GHz dual core processor, and a full 1GB of RAM. As an added differentiator, it also boasts a unique 5.1 Dolby Surround Sound System. Rounding out the specs are its 8MP camera with 1080p support and a thin 7.69mm profile, which is a hair thicker than the 6.68mm Ascend P1 S. I guess the S stands for super-slim.

In keeping with the budget-friendly nature of Wind, the Huawei Ascend P1 has also been priced accordingly. If you take on a $40 monthly plan, the Ascend P1 can be yours for $49 on WINDtab. If you go for the cheaper $25 plan, then the price is $199. In both cases, you can get a free pair of tickets to see The Expendables 2 in theatres when you buy this phone. I’m not sure what Huawei has to do with Sylvester Stallone, but there you go. The full press release is below.

MARKHAM, ON, July 19, 2012 /CNW/ – Huawei Canada announced today that the Huawei Ascend P1, with its 1.5 GHz dual-core processor and Android 4.0 ICS OS, is now available to Canadians through WIND Mobile. The Ascend P1 is the latest offering from Huawei’s expanding suite of high-end smartphone devices.

At only 7.69 mm thick, the Huawei Ascend P1 is one of the thinnest smartphones available in Canada. The 64.8 mm frame allows the Ascend P1 to sit comfortably in the user’s palm, giving them the ability to navigate all the phone’s features with a single hand.

“The Huawei Ascend P1 is the perfect device for smartphone enthusiasts,” said Anthony Lacavera, CEO and Chairman of WIND Mobile. “And when combined with our contract-free, truly unlimited plans users can get the most out of their Ascend P1.”

WIND Mobile will launch the Ascend P1 at for $49 on WINDtab and will be available at WIND Mobile locations nationwide. For a chance to win a Huawei Ascend P1 smartphone, and a trip to Los Angeles for the Hollywood premiere of The Expendables 2, please visit http://www.facebook.com/WINDmobile.