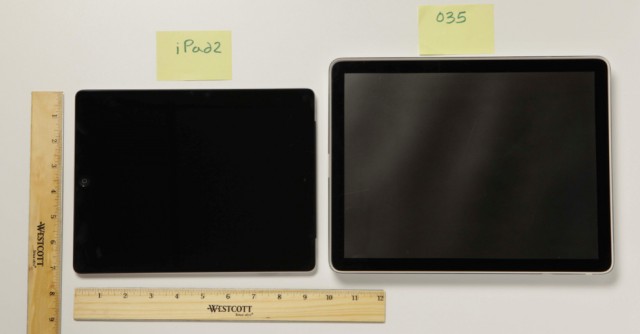 The iPad as we know it is a slim, sexy device loaded with a great OS and plenty of apps, but it certainly didn’t start that way. Recently the net world has been abuzz with information about the leaked 035 iPad prototype, which dates back to sometime between 2002-2004. These photos were published to the net by BuzzFeed, and it is speculated that they probably came from court documents filed between Apple and Samsung about design copying, even though BuzzFeed hasn’t said for sure.

The 035 is a monster, to say the least, at nearly an inch in thickness and bearing a screen that is clearly larger than the iPads we know and love. Can you imagine holding one of these? You can clearly see the iBook roots when looking at the 035, and I can’t help but notice that it looks a little like the modern Toshiba Thrive 13-inch model.

While we don’t know tons about the 035 prototype, we do know that in a court deposition in December, Jonathan Ive did mention this prototype and at least somewhat confirms the legitimacy of the photos by saying it looks like it was one of the prototype units he saw sometime between 2002 and 2004. From what we know, the 035 was a non-functioning prototype design used for reference during the R&D process. While its a little unwieldy and bulky by today’s standards, I have to admit I kinda like it personally, maybe its just nostalgia over my old iBook?