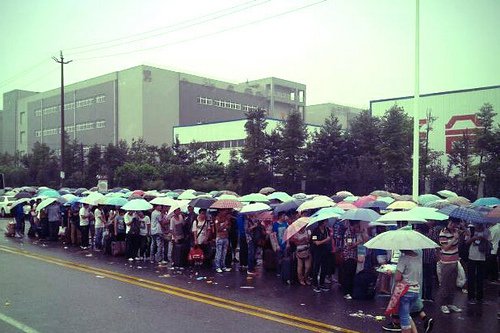 When it comes to future Apple products, such as the iPad Mini and iPhone 5, we as consumers get excited about the idea of new products heading our way to America or Europe, but what about those on the other side of the fence? Apple gives us shiny new toys to play with, and that’s exciting- but in China the idea of upcoming new Apple products means that plants like Foxconn will need more seasonal workers to help push out these upcoming units and for those that are currently unemployed, nothing is more exciting than having income, even if there have often been accusations that Foxconn’s conditions are less than desirable.

Many of us take our situations for granted, but looking at the picture above, think about it, have you ever had to wait in such a massive line during a rainstorm just for the possibility of a job? Of course some of you might have had to go through something close to this situation, considering our economy.

What’s even crazier is that these would-be jobseekers all have to pay Foxconn 150 Chinese Yuan, about twenty-four bucks, just to apply. Sure, there are probably at least some of these people in line that are of college-age level that simply want a seasonal job and like the idea of possibly tinkering with a new iPhone or iPad as much as we do, but for the vast majority its just about having income coming in, no matter the source. Next time you are waiting outside in a long line for the next iProduct, remember the picture above and think about just how different things are on the other side of the world.