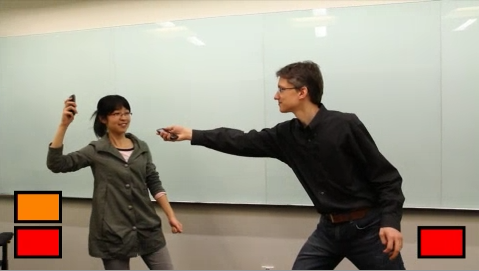 Motion gaming is nothing new, with the Nintendo Wii being one of the first major successes in this area. When it comes to mobile gaming, most motion-based games are tilt-games that use your phone’s accelerometer, but imagine if you could have a virtual sword fight using your smartphone- that’s exactly what Microsoft Research has sought out to do with its new “FAR” technology. Essentially, the technology is a sound-ranging system that uses a series of chirps to detect exactly how close two phones are from one another. This localization technique is nothing new, but Microsoft has been working hard to improve the way it is done and find interesting ways to use it.

One proof-of-concept game developed using FAR is SwordFight, which pits two players against one another with virtual swords coming out of their smartphones. If one player’s phone strikes with 15cm of the other player’s phone, the second player loses one point. FAR makes use of existing components like microphones and really the only other needed hardware for SwordFight is the phone’s accelerometer and digital compass.

Outside of SwordFight, there are other broad uses that a localization technique like this could be used for, but at the moment its only shown-off use is for gaming. While the technology could easily be thrown on to Microsoft’s Windows Phone platform, for now MS has no plans to release the technology or the game “SwordFight” to the general public, instead choosing to focus on continuing to work with the new technology and find better ways to refine it.

SwordFight isn’t the only game that has been created to make use of the technology, another game is ChaseCat, which uses the same technology to let one player chase after another and score points by getting within a certain distance of them.

While it’s an interesting concept, it still has to make its way past certain obstacles, like the fact that the chirps made by the phone are very noticeable audibly, but there is certainly potential here.