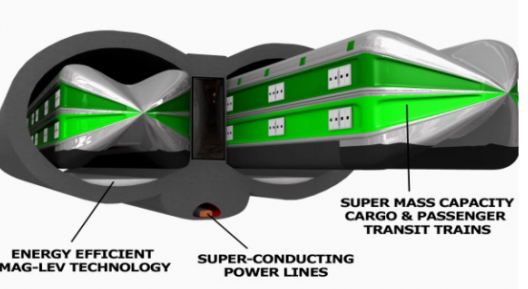 Wouldn’t it be great if you could get from New York to San Diego in less than an hour? The crazy thing is that we already have the technology to do that, but we’re not building it. Why?

The transport technology is fundamentally based on the pneumatic tubes that once shot telegrams around buildings. I’m sure you’ve seen them on TV and in movies. You put a canister in the tube and it goes shooting off to its destination. This was a future view we had at one point for human transport and we still see in sci-fi programming today.

The real world application of this idea to transporting people around is two-fold: first, you need a vacuum tube. This eliminates all the air in the transport tube and, thus, all of the air resistance. This is easily one of the biggest forces that is preventing us from going faster, as demonstrated by our cars, trains, and planes. The second part of it would make use of existing magnetic levitation (mag-lev) technology, virtually eliminating all friction. Combined, Terraspan’s theoretical vacuum tube train could reach speeds of up to 4,000 mph. Better still, the tubes would double as a superconducting power lines, making for an transcontinent power grid that could redistribute power across the country.

With those kinds of speeds, you could theoretically make it from New York to San Diego in about 45 minutes. So, why aren’t we doing it? There are two main factors again. The first is safety. There is an obvious risk for catastrophe if a train traveling at 4,000mph goes awry for any reason. The smallest break in the vacuum tube could be catastrophic. There’s also no saying what would happen when the train leaves the vacuum and re-enters normal atmospheric pressure. What would happen to the train and its passengers?

The second concern is cost. Mag-lev train lines are already incredibly expensive; the Linimo HSST in Japan is relatively low-speed and it cost around $100 million per kilometer. Considering that a theoretical line from New York to San Diego is about 4,500 kilometers, that’s $450 billion, not including maintenance costs, land acquisition, and the prohibitively expensive cost of the vacuum tube; although we have already spent twice that on Iraq.

In the short term, the vacuum tube train isn’t going to be a reality. Then again, people had many of the same arguments about airplanes–they’re unsafe and too expensive–but here we are flying from Tokyo to London on a daily basis.