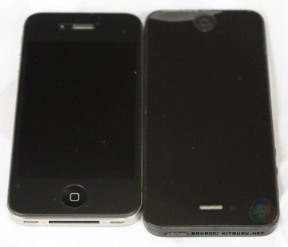 It’s been a long time since the release of a new generation iPhone. Sure, we had the iPhone 4S, but people have been waiting for a true successor to the iPhone 4 for a very long time. This is probably why iPhone 5 rumors and supposed ‘leaks’ have become a dime a dozen, of late. This newest ‘leak’ comes courtesy of KitGuru.net, who claim to have landed their hands on an actual test unit of the device.

This instantly begs the question, how would a little site like that end up with a test unit of something that Apple undoubtedly keeps under strict lock and key? While this “test unit” is more than likely nothing more than a Photoshopped image, it still has to be said that this looks a lot like what we have heard and want from a new iPhone.

This iPhone image shows a device with a larger screen and a 19-pin mini connector, two things we’ve been promised in rumors recently. Regardless of whether its real or not, it’s still nice to see a side-by-side of what a larger iPhone looks like next to the iPhone 4S.

Interestingly enough, KitGuru has since pulled the post about the iPhone 5. There are a few possible reasons why they would do this:

More than likely, it’s the second reason that will prove true, and that this thing is 100% fake, simply a way of getting cheap and easy publicity to their site. Even if this isn’t the ‘real’ iPhone 5 after all, I personally do hope that whatever Apple does reveal in coming months does make good on rumors of a larger screen, at the very least.