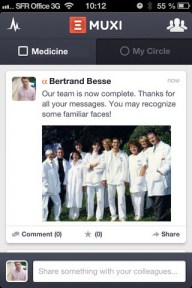 Muxi co-founder Betrand Besse claims that there is still an opportunity in the business networking side of things simply because LinkedIn acts more as a place for your resume than for true networking. Besse states that LinkedIn doesn’t really have a true “Social” component, compared to services like Facebook, and Muxi hopes it can offer the best of both worlds. Of course Facebook has also made attempts at getting some of the business crowd, so even the business social niche is becoming rather full.

LinkedIn’s primary ‘social aspect’, beyond resume-type profiles, are the LinkedIn Groups feature, but even though LinkedIn has 691,000 members, the groups portion only gets about 60-70 posts each week.

Muxi promises to offer something that is very professionally-aimed, yet has all the social tools you’d expect from a true social networking platform. Today the app component of the new social service is launching in the US, but it will only offer it through invite-only mode for now.

Muxi makes use of a system that includes “fraternities”, which is its version of groups, and even gives its users Greek letters that indicate their status based on how much they participate and offer to the community. In total there are 40 fraternities which allow you to share your professional information, ask questions, network, post jobs and more. Muxi also has integration features that mix in with Facebook and Twitter. You can also set your personal contacts separately from your professional or group contacts when it comes to following them or getting updates.

This seems like an interesting enough idea, but it’s a tough market and even former kings like MySpace have quickly seen their star dim in recent times. Does Muxi have what it takes to establish itself in an already highly competitive social market? If Muxi truly gains any ground, will LinkedIN step up its social aspects more or will it too go the way of MySpace?