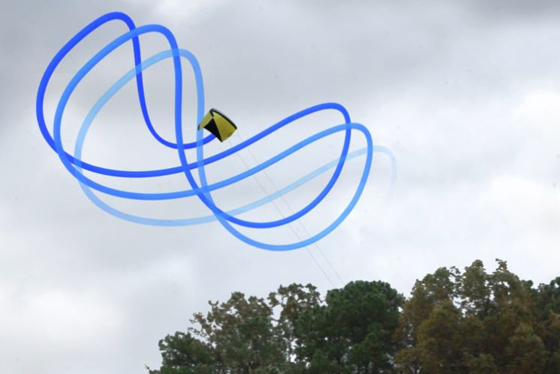 According to David North, an engineer at Nasa’s Langley Research Center, more than 90% of the energy from a wind turbine comes from the blade’s tips, since it is traveling faster and therefore producing more energy in turn. With that in mind, North believes that the best type of wind energy would be to use a specialized wind-harnessing kite that uses a lightweight teeter. This system could go up much higher in the air, where wind is blowing faster, and it is extremely portable so it could certainly be moved to places were temporary power was needed, such as war-zones and military/research installments.

Most tower turbines today are about 300 feet high, but the sweet spot for great power generation actually would occur around 2000 feet and higher. In order to use this high-up wind for energy, you would need to build a turbine taller than the Empire State Building, or instead you could use a kite-like wind generator. There are currently two basic types of airborne wind-energy systems, flygen, which is literally a flying generator with turbines built into a kite. The second is a generator that stays on the ground and uses a reel-out tether as the wind catches the kite.

Right now, airborne energy has yet to really ‘take off’ (pardon the possible pun), but there are several private companies involved in projects to get the technology to the market, and NASA is also involved by working on technological aspects such as autonomous flight control and aerodynamics.

The most important thing is that the energy system be automatic enough that you can set it in place for long stretches of time and leave it be, without having to keep constant watch over it, like a manual kite. At least at the moment, auto-piloting such airborne energy systems have had limited success, though in March of 2012, North and his colleagues did achieve the world’s first sustained autonomous flight using only ground-based sensors. Basically this system used a cheap digital webcam and laptop to track the kite’s motion in the air.

Ultimately, airborne technology might not be ready for the prime time, but it is getting pretty close. There could be a not-so-distant future where kite-based energy is actively used, especially in remote areas where cheap, easy electricity is in desperate need.