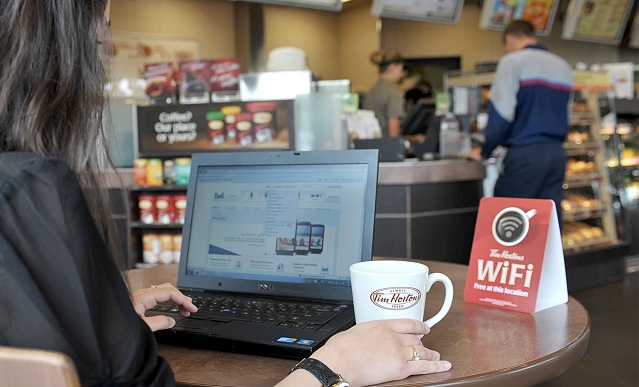 You can already get your fill of free Wi-Fi at McDonald’s and Starbucks, but you’ll soon latch onto the web with your double-double and Timbits too. Tim Hortons has announced that they’re bringing free wireless Internet to over 2,000 restaurants across Canada. They’re saying this will be the largest free Internet network in the country.

This is great for the coffee-drinking public, to be sure, but it’s also pretty great for Bell Canada. Remember that Bell is already serving up the free Wi-Fi at Starbucks, McDonald’s, Indigo and Chapters locations. Adding Tim Hortons to the mix with its over 2,000 locations has got to be a pretty fantastic contract. Tim Hortons underwent a “rigorous six-month testing process with multiple service providers,” finding that Bell “delivered a fast and reliable service.”

The high-speed Wi-Fi rollout at Timmy’s has already started and they expect to cover more than 90 percent of Tim Hortons locations by September. That’s just in time for all the college kids going back to school, returning to the routine of constant caffeination and studying.