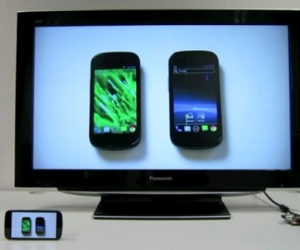 At Google’s recent I/O Event they showed off their new sharing media device, the Nexus Q. Priced at $299, I personally felt the device seemed a little on the high side considering it was mainly for sharing media between phones/tablets and the Q… something that could surely be achieved at a lower price point right? Apparently, I’m not the only one that felt something cheaper could be made, as ESR Labs has created a new project called Android Transporter which can essentially do many of the same things as the Q can. This embedded software is similar to Apple’s Airplay, allowing Android-based devices to stream content wirelessly for display on a TV, projector or HDTV.

While the project doesn’t have its own hardware, it was previously shown off as a proof-of-concept using a Nexus S smartphone to stream it’s video/audio over to another phone using Wi-Fi. Things might be heating up a little more though, as ESR Labs has now ported its Android Transporter to make it work on the ARM-based Raspberry Pi. For those who don’t know, the Pi is a REALLY tiny motherboard that contains everything it needs in one tiny package, except storage which requires some form of flash or SD. Pi is very cheap, at about $35, and is mainly used as a hobbyist device. Using Android Transporter on it, however, you essentially get a really cheap Nexus Q Media Streamer.

A Raspberry Pi running a customized operating system and Android Transporter has allowed the company to stream live video to an external monitor with a 150ms delay. While this delay might make it useless for gaming, it could be perfect for web browsing, video playback, and displays. According to ESR, they are working to reduce this latency well below 100ms.

At the moment, Android Transporter is basically just a “mirroring application”, but soon they hope to expand it to include dual-screen mode where the smartphone can retain its existing display while using the external monitor for video playback at the same time.

Sure, this isn’t exactly the same thing as a Nexus Q, feature wise, but it is still pretty close and obviously much cheaper, considering the relatively low costs associated with a Pi. At least for now, their site doesn’t seem to offer up the Raspberry Pi version of Android Transporter, but if they continue to improve it, I’m sure it’s only a matter of time.

To see Pi handling Transporter, take a look at the video below, and check out their site for more information as it arrives.