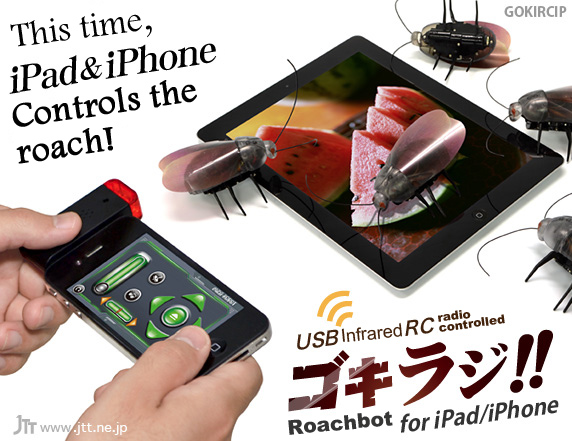 Usually a roach is something you don’t want around the house, except perhaps in the case of the Roachbot. Released earlier this year, this unique little robot looks and skitters in a manner that is eerily close to an actual roach and works with a special remote controller. While the Roachbot sold extremely well at first launch, things have slowed down a bit recently so Japan Trust Technologies has created a new version with some pretty big enhancements, such as the option to use your iPhone or iPad as an alternate controller, or max up the cruising speed of the roach.
Why would anyone want a roachbot? Because it can scare your friends and family, perhaps? Or maybe just because its creepy resemblance to a real insect makes it something different. Most robotic pets are ‘cute kittens’ or ‘precious puppies’, so I suppose this is a nice change of pace for some.
The new Roachbot model, called Gakiraji, comes in several different packages and configurations starting at 2980 yen, which translates over to about $37 US dollars.