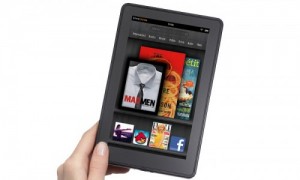 With rumors surfacing of $199 Nexus 7 tablet, its not surprising to hear that Amazon might be working on a new tablet of its own, the second generation version of the Kindle Fire. Supposedly the new update to the Fire could arrive as early as July 31st. While we don’t know much about what a new Fire would bring more than likely a new version would address some of the areas of concern with the first Kindle Fire, which would meaning making revisions like adding a higher resolution, hardware volume controls and a camera.

If rumors are to be believed, the $199 Nexus 7 is going to feature a quad core Tegra 3 processor, so perhaps similar power under the hood will make its way into the new Kindle Fire? At this point its hard to tell at this point. More than likely, when the 2nd-gen Fire does arrive they will also announce new Kindle eInk devices, in similar fashion to how they handled the launch of the 1st-gen Kindle Fire. What improvements and revisions do you hope to see in a next generation Kindle Fire?

It’s entirely possible that Amazon might even consider more than one version of the Fire to better compete with so many new tablets coming to the market, such the Nexus 7, Microsoft Surface and the new Windows 8 tablets that we will soon see at the end of this year. I certainly wouldn’t mind see a budget-priced 10-inch Kindle Fire.