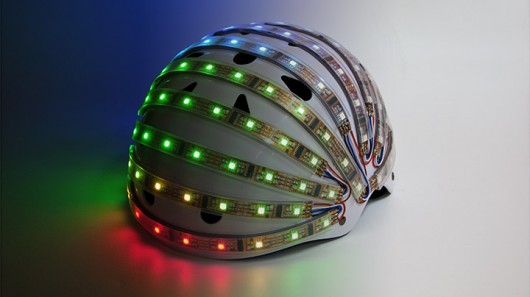 Looking for a way to stay safe when riding your bicycle in low-light conditions or at night? The LumaHelm is designed by a team of researchers at the Royal Melbourne Institute of Technology’s Exertion Games Lab, and makes use of 104 multicolored programmable LEDs which makes it the perfect safety helmet for such conditions.

The project for the LumaHelm was lead by Wouter Walmink, Alan Chatham and Floyd Mueller using a standard bike helmet. This was important because starting from scratch or changing the shape in any way might have made it no longer fit within existing safety standards. The LumaHelmet is covered in strips of LEDs wired together and hooked up by an oboard Arduino Uno microcontroller. The outer surface of the helmet is covered in a vacuum-formed shell.

Using an external compute and a little programming knowledge, you can pretty much make the board have any lighting pattern you could desire. The helmet also has an accelerometer that lets it’s wearer control the lights using head movements.

At the moment, this isn’t a commercial project and it doesn’t sound like they have any immediate plans for such use, though they are interested in seeing how it could be used in other areas that need helmets that might mark visibility, such as construction.