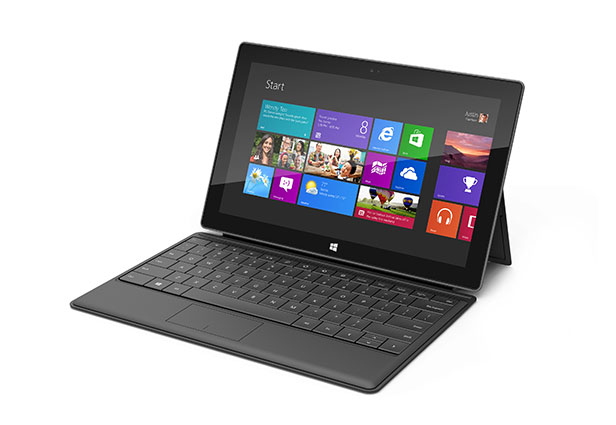 In a very lengthy, yet compelling read, Gizmodo produced an article that essentially applauds the new Microsoft Surface tablet and welcomes it as a game changer that makes the Air and iPad look obsolete in comparison. The article goes on to state that the system follows the ten design principles that folks like Apple’s Jonathan Ive seem to live by.

Summarizing the article’s key points, the Gizmodo article points out that the Surface isn’t quite like anything on the market right now and has the ability to potentially do everything that an iPad and Air can do right now- but without the need for two devices. The Surface seems to provide a very sleek looking package that is durable, sounds easy enough to use and yet follows a somewhat minimalistic approach.

While the Gizmodo piece primarily focuses on the hype that surrounds the new Microsoft tablet, the author also indicates that unknown elements like battery life and price could make all the difference. If they manage to have good battery life and great pricing, I agree, the Surface could be an important way for Microsoft to better compete against Apple products like the MacBook Air and iPad. Is this an iPad killer? I honestly have some very serious doubts about that, but it could certainly be an important alternative that could gain a fair amount of popularity if the execution is right.

From the sounds of it, Surface will have several variants such as a Intel/Win8 model and an ARM/WinRT model. For those that don’t know, the upcoming Metro-based Windows 8 is the Intel-designed version of the OS, while RT is specifically built around ARM processors. Beyond an ARM and Intel version, there are also two versions of the keyboard/cover, one having touch buttons and the other being a physical lightweight keyboard. You can also likely expect some versions will support 3G/4G technology and some will be WiFi only- though MS has yet to tell us much about its connectivity options in that regard.

There are a TON of variables involved in the Surface, and we don’t really have enough solid details to really make any true predictions about how well it will do. I have a feeling that Windows 8 and RT will quickly leverage the Windows OS developer community resources to through together tons of great apps, so I’m not worried as much about the OS side of things, or at least not that worried. What I’m more curious about is how well the hardware will stand up and how well pricing will compete. In order to get a MacBook Air and iPad replacement are you going to have to pay $1500 to get mobile broadband, a physical keyboard and a more powerful Intel processor? If so, the appeal of the Surface certainly goes down. If you can get a netbook/ultrabook/tablet replacement out of the Surface for $800-$1000? Then it certainly looks like a very interesting choice, and an attractive one at that. Either way, late-2012 seems to be the beginning of a whole new chapter in the mobile device wars.

Personally, I look forward to the Microsoft Surface, even if I’m still not 100% sure what to think about it.

What do you think about the Surface so far? An Apple killer or just another tablet that will quickly have its hype die down over the next few months?