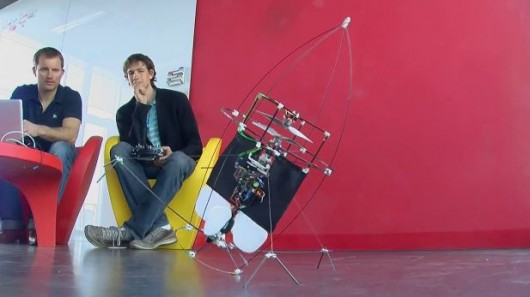 Inspired by the way that many insects can fly, fall, and easily pick themselves back up, the Laboratory for Intelligent Systems at Switzerland’s EPFL federal research institute set out to create a flying unmanned aircraft that could do the same. They succeeded in creating such a vehicle using a series of propellers and surfaces made with an open, flexible carbon fiber frame.

The aircraft’s frame is flexible enough that it has a little give and can prevent itself from breaking on impact. The material is also lightweight and when it does fall, its four legs extend and can push it back up for taking off once again. The system involved for pushing itself back up is called the “Active Recovery System”.

This UAV is designed to operate in cramped, hazardous settings and make its way through an area filled with constant obstacles. The concept is interesting to say the least, especially in environments where a flexible craft that can relaunch itself would be needed.

Check out the video below to see it in action for yourself.