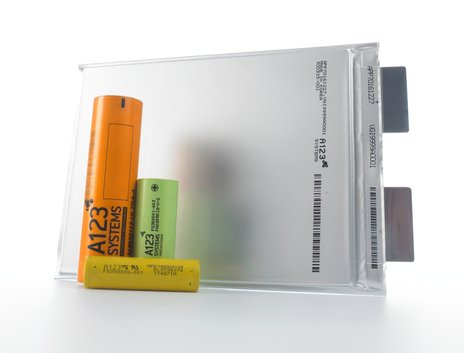 Even though you may be saving at the pump, owning a hybrid or pure electric vehicle means that you have to replace that expensive lithium-ion battery at some point. However, A123 Systems claims that it has created a battery that doesn’t need replacing. In fact, they’re saying that it will last as long as the car that it powers.

“Say you want the car to go for 150,000 miles–that’s perhaps 500 cycles,” says chemical engineer Venkat Srinivasan. “That by itself may not sound like a big problem, but I also have to do it over the 10 to 15 year expected life of the car, and that is a problem. It’s hard to simulate the passage of that much time!”

The Nanophospate EXT technology by A123 Systems somehow extends the life of the battery so that it is able to survive for that long. At its core, A123’s approach is to use iron phosphate cathodes, which are more stable. To make up for the poor conductivity, they add traces of other elements and structure the cathodes on a nanoscale, allowing the molecules to rearrange themselves faster. This results in less physical stress and, presumably, the ability to last through more charge-discharge cycles. It is designed to provide better performance over a wider range of temperatures too.

But these are all claims coming from a company that lost the Chevy Volt contract and then had the Fisker Karma deal go south when it had to recall potentially defective battery packs. Until we see real commercial deployment, we’ll have to take these claims with more than a few grains of salt.