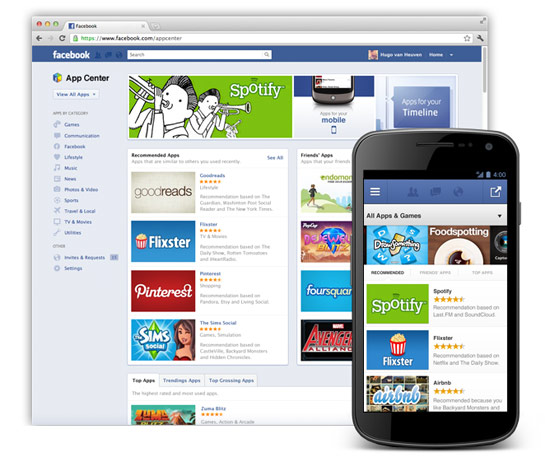 These days it seems that “app stores” are all the rage, from Apple’s AppStore to GooglePlay and even the upcoming Microsoft App Store in Windows 8. Feeling a little left out I suppose, Facebook announced its own store, the App Center, featuring 600 applications from the likes of Nike, Pinterest, Ubisoft and more. The platform works through iOS and Android devices.

Unlike a traditional app store, the App Center isn’t really meant to be a full replacement and solution, instead it is a great place to find apps for Android/iOS that are already out there and require a Facebook log-in. Basically, there are already many apps out there that have some form of Facebook integration within them, App Center just makes it much easier to find these kinds of apps. Facebook probably feels this is the best way to draw attention to these Facebook-integrated apps and in return it might generate more and more interest from developers.

Overall, not a bad idea, though honestly I can’t see that many people using this very often when there are many good non-Facebook-based apps out there that they can find in places like Apple’s store and through Google Play.