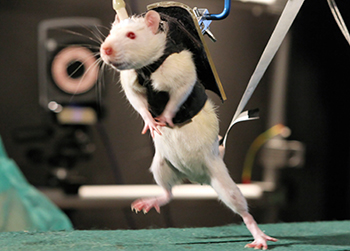 It seems that the Swiss Federal Institute of Technology Lausanne has just a made a pretty big breakthrough, teaching paralyzed rats how to walk again. The idea is that they paralyzed rats by severing the spine and the hind limbs of the animal, the researchers left part of the spinal cord there but created a lesion that prevented the brain from directly connecting and communicating with the cord.

In order to help them walk again, the researchers encouraged the brain and cord to make structural changes by convincing the organs that they still could communicate with each other. This was accomplished by injecting various chemical agents into the broken parts of the cord to mimic the normal chemicals that would have came from the brain. This made the brain think everything was functioning and the animals then could be coached to walk over time. Coaching the rats to actually walk again wasn’t easy, but  a robotic device was also crafted to help them move freely; like chocolate put into sight in order to encourage them to move over the multiple trails. In time, they could walk again, which is pretty impressive. Even more impressive is that tests showed that both the spinal cord and brain were both working together to help the rodents walk again.

This is a step forward in research, and even though I don’t agree with severing spinal cords of animals for research, it is hard to argue that this could end up having some pretty strong benefits for mankind with more severed spines down the road.