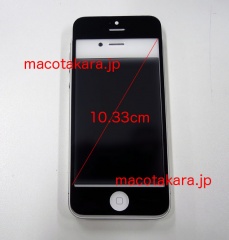 There is no shortage of iPhone 5 rumors these days with WWDC 2012 coming up in just a little over a week. Recently, most of the rumors have been associated with the smaller looking port that many are claiming could be a micro-USB port or even a new MagSafe connector. Now we have a look at a four-inch long front panel that claimst to be part of the new iPhone.

This longer panel suggests a 16:9 style body and screen, and fits in with the idea of a longer, small port iPhone as well. The video shows the faceplate stacked up against the existing 4S. Keep in mind that it is really easy to throw together a convincing iPhone shell these days so this could be nothing more than a fake.

Honestly, the idea of a radically different iPhone seems reasonable though. The iPhone size and form factor has pretty much stayed the same since it first arrived in 2007, and if Apple is really making a huge change like eliminating the 30-pin iConnector, it might stand to reason they would be doing a bunch of major changes at once to really signal just how different this new iPhone is. While we don’t know much at this point, we can at least keep our fingers crossed and hope that we learn more solid information at WWDC.

With such a radical change in design and port style, I wouldn’t be shocked if Apple calls the next iPhone simply the new iPhone, just like they did with the iPad.