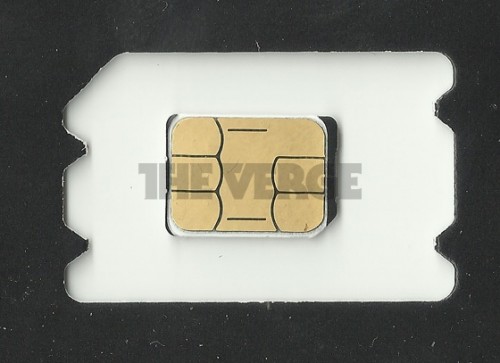 Realistically, all that extra plastic in a regular SIM card (mini-SIM) doesn’t do anything but take up space. That’s why Apple moved to the micro-SIM for its current line of iPhones, but even that isn’t small enough. Now, the nano-SIM has been confirmed and it’s 40% smaller than the micro-SIM.

The picture here shows the prototype from Apple. The nano-SIM is pretty much just the gold-plated connector portion and all that white plastic around it is how big a regular mini-SIM would be in comparison. And this standardized design has been adopted by the European Telecommunications Institute (ETSI). The nano-SIM measures just 12.3mm by 8.8mm and just 0.67mm thick. The “pop-out” design here would make these new SIMs more easily backwards compatible with other devices, in case that’s how the carriers wanted to go about doing things.

One difference between the Apple-submitted design and the one backed by RIM/Motorola is that the latter had “an extra notch to enable so-called ‘push-push’ mechanisms in SIM slots that wouldn’t necessitate a tray.” I like that idea, but it appears that Apple’s non push-push design was the winner.