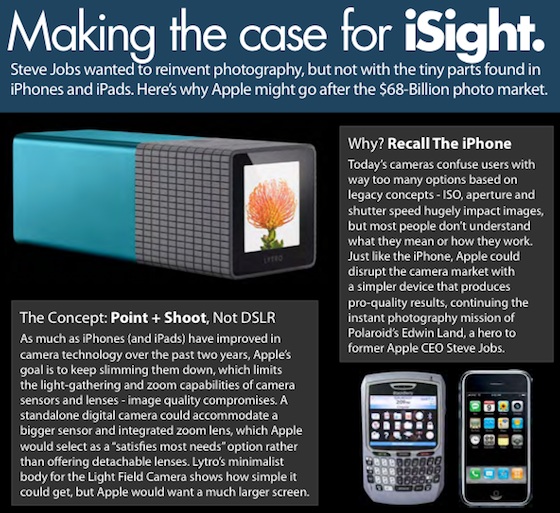 The case can be made that Apple doesn’t necessarily do brand new things, but that it rather does existing things in much better ways. The iPhone wasn’t the first touchscreen smartphone, but it sure changed the game. The iPod (and iTunes) shook up the way that we listen to music. And now it looks like Apple is going to tackle the world of digital photography.

Yes, the camera on the current iPhone is certainly top-notch, but there’s only so much you can do with a cameraphone. There is now word that a standalone point-and-shoot digital camera is being developed in Cupertino. For instance, the increasingly slimming iPhone and iPad are necessarily limited in their photography abilities, because you simply can’t place a long zoom lens on there. With a standalone digital camera, you can.

If you’ve read the biography of Steve Jobs that Walter Isaacson wrote, then you may remember when Jobs said he wanted to reinvent television, textbooks and photography. Apple is arguably doing textbooks already with the Textbooks initiative in iBooks and we’ve been hearing rumors of an Apple HDTV already. That leaves photography. The “New iPad Buyers’ Guide” by iLounge features a two-page spread on this topic of an Apple P&S.

Given Apple’s propensity for high performance in a simplified package, the camera can’t possibly be a DSLR. I imagine the Apple iCamera, iShot, iCapture, i___ would do away with most of the manual controls too, leaving you with an auto mode that’d take care of things like ISO, aperture, shutter speed, EV, and so on. Just like how Mac OS X, iOS, and even the click wheel changed the way we use the respective devices, we just have to wonder how Apple would change the way that we take pictures.