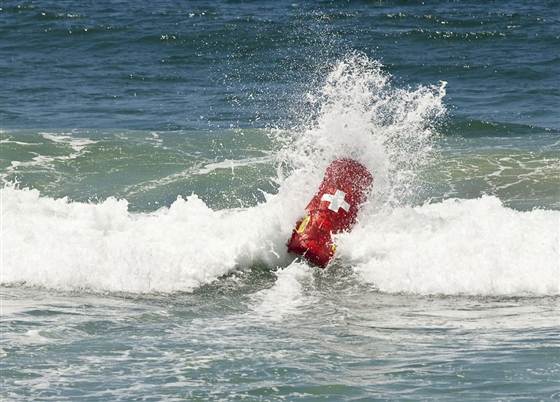 When it comes to saving lives out on the open waters, Los Angeles County Lifeguards are adopting a new first response measure, the use of a robot lifeguard. Okay, so this is really more of a floating buoy that can travel 25-miles per hour and hold up to 4 victims while human help arrives, but nonetheless its great to see robotics really advance to the point they are even able to help save human lives. The new robotic lifesaver is known as E.M.I.L.Y. Which stands for Emergency integrated Lifesaving Lanyard.

It’s co-inventor and President of Hydronalix, Bob Lautrop, first unveiled the device about two and a half years ago but has now finally started making real deals to get these units deployed throughout the US. While Zuma Beach in Malibu is the first to put the $10,000 tool to use, it is also being deployed soon in Depot Bay, Oregon and Westerly, Rhode Island.

While E.M.I.L.Y. Is not a replacement for a traditional human lifeguard, it is designed to get to the scene as quick as possible until humans can arrive and is very much in working condition now, even though Hydonalix still plans to continue to evolve the set of features that the robot has in the coming years. In fact, since it was first shown off two and a half years ago, it has already added several improvements such as safety features like a screen on the intake valve of the jet pump to prevent fingers or hair from getting sucked in and they’ve also added hand loops on the side of the device to make it easier for drowning victims to hold on as they wait for a proper rescue. One feature that the company hopes to bring to E.M.I.L.Y in the future is a sonar scanner that will allow it to look for objects and people trapped below the surface.