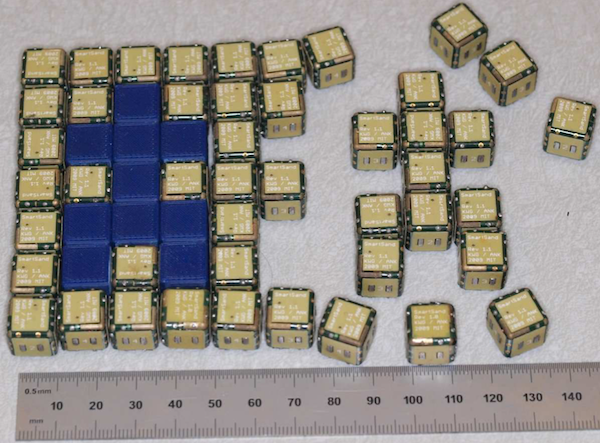 Can you imagine a world where tiny little cube robots can bind together to form replicas of existing shapes and items just by sensing their presence? No, I’m not talking about some crazy CGI enhanced scene in a summer blockbuster Sci-Fi movie, we are talking about the MIT project lead by Professor Daniela Rus. The “Smart Sand” project has tons of obstacles to climb over before it truly gets very far off the ground, but it is attempting to use large cubes, 12mm on each side, that can actually bind together to mimic real objects.

At this year’s IEEE International Conference on Robotics And Automation, Kyle Gilpin, one of the researchers involved, actually demonstrated an algorithm that makes this possible. Though the demonstration only showed off a formation of a VERY simple object, the potential is huge. The idea behind the technology is that each of the “smart pebbles” can only process a little information about the object they need to duplicate, but that is fine, since as long as each part obtains a little information about the object, they can put it all together through information sharing to solve the problem.

Before they really can achieve more advanced replications of different objects and shapes, they will more than likely need to shrink the size of the cubes, which Gilpin believes is certainly possible, though difficult, and would like to get down to a size of at least 1mm.

We are quickly approaching a very strange Sci-Fi future, between this new smart robot technology and developing 3D printer concepts. More than likely, we will look back at technologies like this in another decade or two and think, “Was this stuff really that unbelievable back then?”