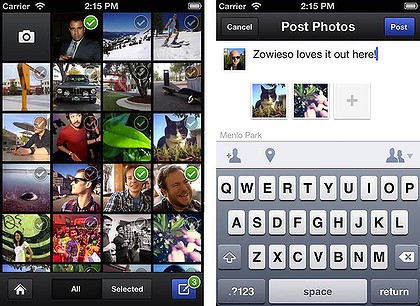 A new Facebook application has hit the scene that will allow you to take Instagram-styled pictures and share them with iPhones. This app syncs to the social network and makes sharing and using Facebook photos much easier than ever before. The program also has the ability to share many pictures at the same time, instead of individually posting them. In April, Facebook bought Instagram in a multi-billion dollar purchase, so it isn’t really surprising to see an app like this surfacing. Since the release of Instagram in 2010, the app has been downloaded for iOS devices about 30 million times- which is fairly impressive to say the least.

While creations like the Facebook Camera app are a step in the right direction for pulling the company out of a small slump, there are other setbacks that stand in their way, namely dozens of law suits from investor complaints. These suits say that Facebook distributed the shares while with-holding crucial forecasts that pointed to weaker growth for Facebook, instead only sharing this information with bigger clients.

While Facebook is still a giant in the social networking world, MySpace has proven to us that even the biggest social giant is vulnerable to failure in this very competitive market.