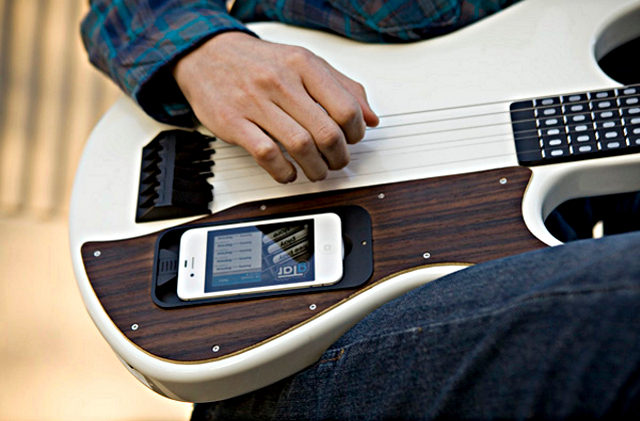 There are many guitar playing apps out there for the iPhone, but what about full guitar solutions that integrate with your iPhone? The gTar was recently launched on Kickstarter to help players learn how to teach themselves the guitar, using a digital ‘educational’ guitar that comes with a built-in iPhone dock that makes use of sensors to realy what you’re playing to a special iPhone app. An interactive row of LEDs along the fretboard will also show you how to play certain cords and songs along the way.

It’s amazing what technology can do when it comes to teaching us how to play instruments, it’s certainly come a long way from “Guitar Hero”, that’s for sure. The gTar has three levels for learning- easy, medium, and hard. While this isn’t meant as a replacement for a guitar and really can’t truly replace full guitar lessons, it is a great way to get started, get familiar with the instrument and build up your confidence. The gTar will soon retail for $450 and will also have a software development kit released for it, allowing developers to really make the most out of the gTar with their musical apps.