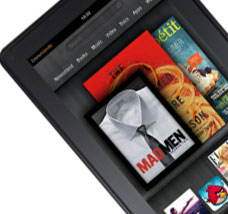 When it comes to tablets, there are really only two devices that have done all that well, the Kindle Fire and the iPad. Alright, so there are many other great options, but there really is no denying that these two have made the biggest splash so far. While the Kindle Fire does a great job at targeting the low-end segment, what about the mid-market or higher end? Could Amazon actually take a run at this market and compete more directly with Apple?

It seems that Amazon thinks so, according to DigiTimes, Amazon is likely going to launch a 10.1-inch Kindle Fire variant sometime this year. According to the rumors we are hearing, Amazon has even cancelled the previously rumored 8.9-inch version in order to focus on the larger screen market.

Would a 10.1-inch tablet actually have a chance at competing against Apple? Honestly, Amazon’s customized UI is pretty decent but they’d really have to step it up a notch if they wanted to really set themselves apart from the iPad.