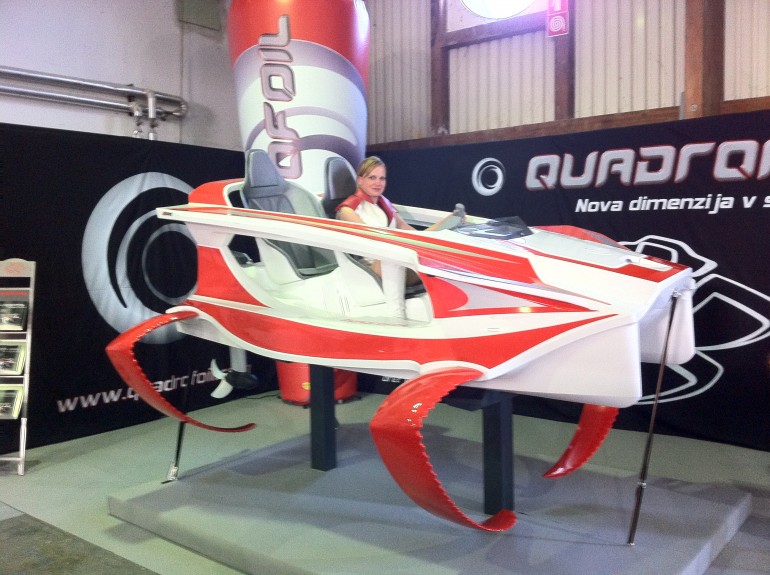 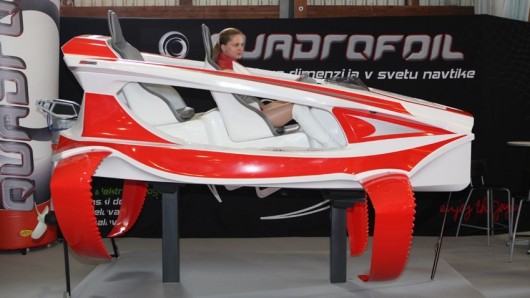 From speed boats to jet skis, there are certainly plenty of great on-the-water recreation methods out there. Just in time for the summer, comes a very unique revolutionary water toy, the Quadrofoil. Developed by three Slovenian designers in just six months, the Quadrofoil concept has had such good reception that it is already planning a production run of 100 units this year. A concept to marketing time of less than a year is impressive without a doubt, and from 2013 onward the creators plan to produce roughly 10,000 a year.

So what is the Quadrofoil exactly? It is a two-person electric craft that essentially uses for hydrofoils to ‘float’ right above the surface of a body of water. This means you don’t create huge wakes, and, in part thanks to the electric design, it has minimal impact on the marine wildlife within the waters.

The downside of this current model is two-fold though, first it costs $19,100 US Dollars and an additional $6,370 deposit to reserve a spot on the coveted waiting list. The second part of the downside? The device runs on a 3.7 kW electric motor, and can only top up to 25mph (22 knots). Alright, so this is still an impressive craft, and 25MPH is still plenty fast enough to have a ton of fun on the water, but personally if I were to spend $20,000 on a water craft, I’d wait for a second generation model and probably get something a little more practical. The developers are already working on the next version, which will be much faster from the sounds of it.

The great news about the current model Quadrofoil is that it’s 3.7 kW motor is low enough in power that you don’t have to register it, have a PWC license, insurance or navigation permit in the European Union. As for the states? It’s hard to say how the device will be classified at this point.