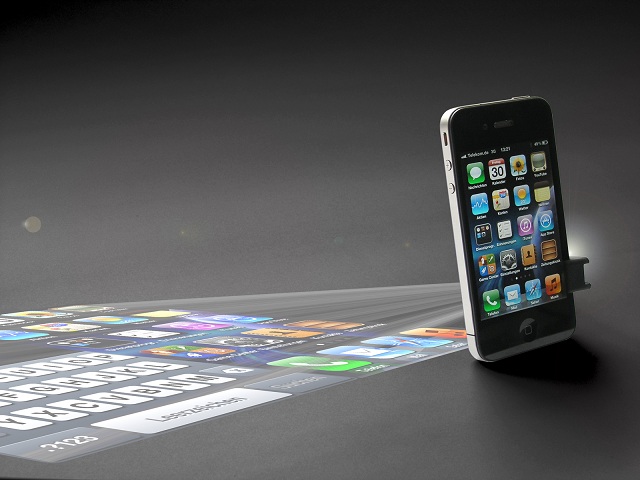 There is a limit to how big the display of a smartphone can be and it’s always better if we can watch photos and videos on devices with bigger screens. But in the future, a new LED projector being developed by the researchers at Fraunhofer could be able to help.

A smartphone in the future, like an iPhone 5, could be equipped with this projector to project images onto a surface and you will be able to interact with the projection with your finger the same way you would do on the phone’s screen. The projector is based on an insect’s compound eye and it actually consists of small microprojectors.

Researcher Marcel Sieler says, “Our projector consists of hundreds of tiny microprojectors in an array, each of which generates a complete image. This technology, known as ‚array projection, is modeled on nature – on the compound eye found in some insects – and with it for the first time we can create very thin and bright LED projection systems with tremendous imaging properties”.

Each microprojector will project the same image onto a surface and all the individual images will overlap to result in a very sharp and bright overall image. And based on how far it is from the surface, each microprojector can also independently adjust the focus of its image. The necessary data for this could be provided by the phone’s position sensor and camera. The researchers made the projected screen touch sensitive via the use of infrared beams.

But the system needs more work to be done on it and it won’t be available in smartphones sometime soon. But they will be showing it off at the Optatec trade fair in Frankfurt later this month.