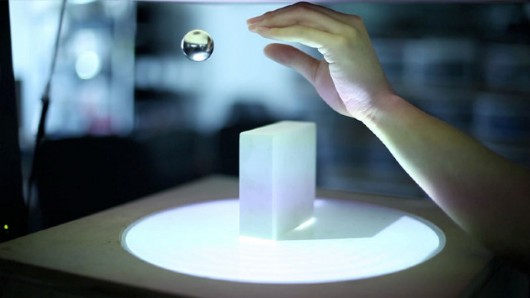 We live in a time where new technologies are constantly being discovered and manipulated to do things that were previously relegated completely to the world of science fiction. The age we are in is a marvelous one because we are just now starting a trend of pushing the realm of what we think is possible, and the new ZeroN is one technology that does just that. Basically, this MIT Media Lab project uses a small plastic-coated spherical magnet, called ZeroN, that can move around and be placed anywhere within its 3D block of anti-gravity space. This means that ball can be placed in any spot in the air and just stay there. This is pretty cool and is accomplished using a three-axis motor controller, while tracking motion using none other than two stock PS3 Eyecam devices, alongside a video projector. It’s amazing just how many high-tech projects seem to get started using parts that are meant for gaming systems, actually.

Beyond staying where you point it, the system can also track and record movements, as well. Right now, this is a fun trick, though it really might not seem to have a practical application, YET. The truth is that there are a lot of ideas probably easily within reach for such a technology, you just have to get a little creative. Using it as an astronomy model of planets, displaying specific images (projected onto the ball) in mid-space to get a better look, or as a 3D movie camera device.

As you can see, this is an ambitious project, and a pretty cool one at that. The video below can better explain some of the uses and ideas behind the technology, for those interested.