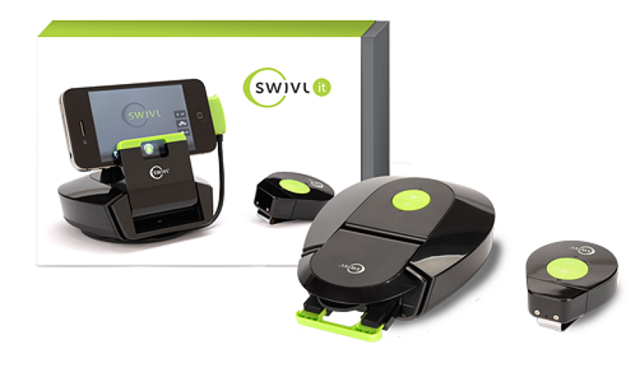 The motion-tracking Swivl smartphone dock is cool, except for the marker device that you have to carry with you always and also the hefty $179 price tag. But the folks at Satarii have just introduced a more basic version of the accessory called Swivl-it which is currently available for $129, although that marker is still needed.

In case you are new to the product, the Swivl comes equipped with sensors that track a marker you will be holding. You just have to dock your smartphone in it, grab the marker, and then start recording yourself or video chatting. When you move around in your room, the dock will automatically follow the marker horizontally or vertically. And iPhone users are able to use a marker which has a built-in microphone.

As you might have guessed by now, the new Swivl-it comes with fewer features. With this version, vertical tilting has to be done manually. And also the marker device won’t have a microphone, so you will have to make sure that you are in range of your smartphone’s mic. But you will be able to purchase a $49 microphone-packing marker later on, but then you should have just got the original Swivl.

And a price cut is important for the makers as there are other products out there like the Galileo which is coming with a lower price tag yet having cool features.