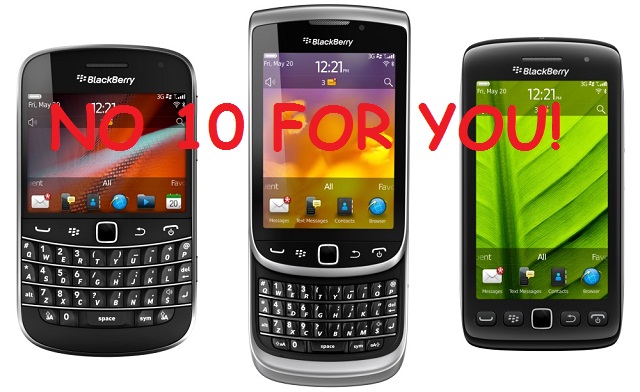 Did you buy a BlackBerry 7 smartphone with the hope that you’d be able to upgrade to BlackBerry 10 when the new OS became available? Well, Research in Motion has effectively dashed that dream to pieces.

During a press conference earlier today, RIM CEO Thorsten Heins made the formal announcement that all the current BlackBerry 7 smartphones on the market today will not be eligible for an update to BlackBerry 10 when the new platform launches later this year. In fact, there is going to be very little in terms of connecting BB7 to BB10, since BB7 apps won’t necessarily work with BB10 devices, nor will BB10 apps necessarily work with BB7 devices. They’re two separate ecosystems and two separate platforms.

While Research in Motion has indicated that it will continue to support BlackBerry OS 7.1 for “a while,” it’s only a matter of time before they completely abandon the old OS (which really isn’t that old) and focus their energies exclusively on BlackBerry 10.