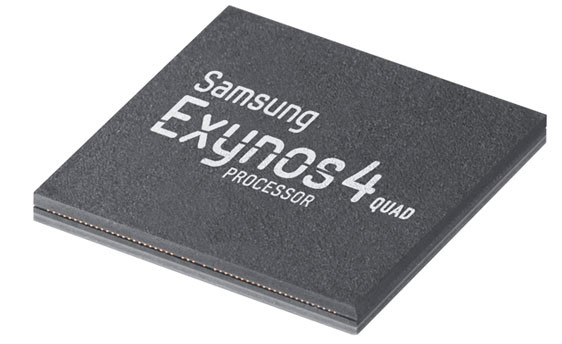 Not too long ago we talked about the new Samsung Galaxy SIII and how it supposedly had leaked into the hands of a Vietnamese site. The folks at Samsung didn’t have much more to say about the whole thing, other than telling us that they’d show us more in May at their Unplugged Conference. Apparently they didn’t want to wait that long after all, as they’ve now announced their new “Exynos 4 Quad” processor, which will power the new Galaxy device.

The processor will run at 1.4GHz per core, is based on the ARM Cortex A9, and has 32nm High-k Metal Gate technology, power management, and per-core dynamic voltage and frequency scaling. Pin-to-pin, it will be compatible with the Exynos 4 Dual, making it easier for manufacturers to make the switch to the dual-core model in upcoming phones. The new processor will also be capable of 30fps 1080p video playback/recording, HDMI 1.4, and will offer double the power of its 45nm predecessor while consuming less energy.

While this doesn’t tell us everything about the new Samsung Galaxy, it does put in place a pretty big piece of the puzzle. Now we just have to wait until the official reveal in May.