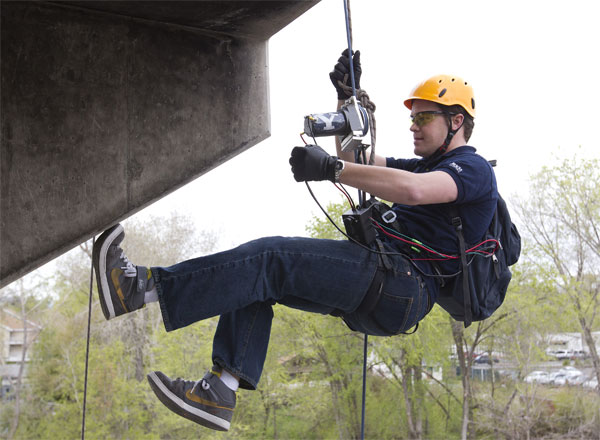 Of all the batman gadgets we have fantasized about, the most common would be the grappling hook gun which the Caped Crusader uses to scale buildings and walls.

Many companies and inventors have tried and brought out successful and decent grappling hook guns, though some were bulky and others dangerous. The engineering students at Brigham Young University (BYU) in Utah have come out with their own version of the Batman grappling hook.  Their effort is aimed at winning an Air Force competition where they hope to catch the eye of defense weapons experts.   The armed forces, adventure sport enthusiasts, emergency services, police forces and of course, masked avengers and caped crusaders, are all possible customers for their invention; which has a fire arm to propel the hook attached to a cable up into the air.

Once the hook is attached to a ledge or a crevice, a winch and pulley system pulls the person up onto the desired height.  Interesting, even though the video put up by the BYU inventors suggests that it requires a bit of a seasoning to scale the walls with ease like the Dark Knight does.  In the mean time, the BYU folks will be trying to impress the weapons experts at the Air Force during the competition, in which the team will get 20 minutes to demonstrate the tool and then train military representatives on how to use it.

The final test of the competition will be to get three people up a 90-foot vertical wall while carrying 300 pounds of gear each. BYU students claim that their tool can push a person up a wall as shown in the video below, at a speed of 30 feet per minute.