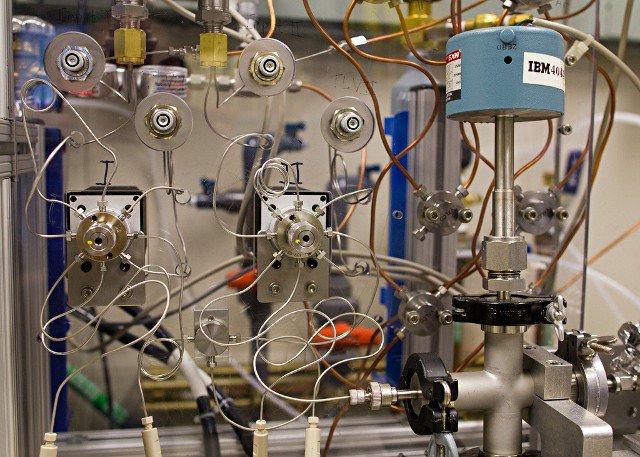 Today’s car batteries are massive, yet can only go about 100 miles, and can never come close to gasoline. But a new technology currently being developed under IBM’s “Battery 500 Project”, could result in a battery that would power cars for more than 500 miles on a single charge. They are developing a light-weight, ultra high-density lithium-air battery, or air-breathing battery, which actually breathes air.

In a lithium-air battery, oxygen will react with the soft element lithium to create lithium peroxide and electrical energy. When the battery is recharged, the process is reversed and oxygen is released. Since the oxygen used for the reaction comes from the atmosphere, the battery will be much lighter compared to conventional batteries.

And these batteries have a much higher energy density than lithium-ion ones. Theoretically, the maximum energy density of lithium-air batteries is 12 kWh/kg. That’s around 15 times greater than li-ion, but more importantly comparable to gasoline. If the project is a success, lithium-air might not only replace li-ion, but also gasoline. That won’t happen anytime soon, but it’s certainly possible.

The talks about lithium-air battery actually started way back in 1970, but at the time we did not have the materials required to build one. But li-air is possible today as we have graphene and carbon nanotubes, and also IBM’s famous computer architecture, Blue Gene. IBM has received assistance from Asahi Kasei and Central Glass.